This week, we’re joined by bestselling author, award-winning journalist and podcast host, Jo Piazza! She is the author of seven critically acclaimed books, both fiction and nonfiction, including a memoir on her first year of marriage: How to Be Married—which seeded the idea for her marriage podcast, “Committed.” Jo is also a former editor and columnist for Yahoo, Current TV and New York Daily News, and has also written for publications like the Wall Street Journal, New York Times, New York Magazine and many others.

Read on to learn Jo’s roundabout path to hosting her own podcast, how learning more about commitment has strengthened her own marriage and how her kids’ curiosity keeps her inspired! 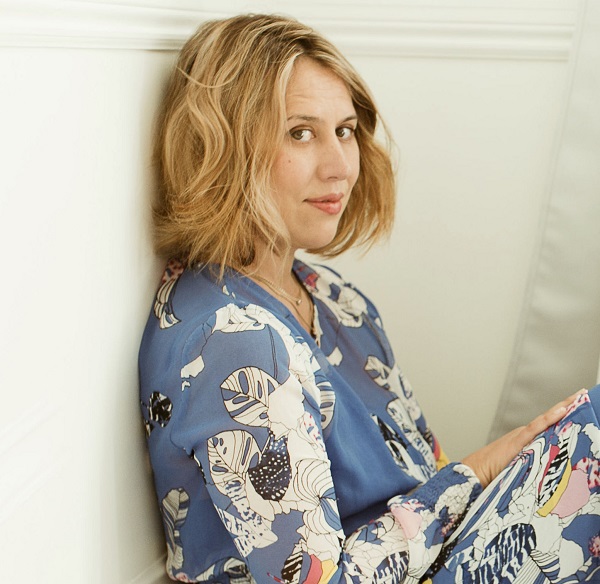 What drew you to podcasting and how did you become a host?

It was a completely roundabout path. And I like to say that when people ask me because I think it’s important to realize that there are a lot of different paths you can take. And sometimes the best opportunities come when you least expect them, which sounds a little woo woo but I believe it.

I’m a journalist, have been for two decades now. Which, shit, that is a long time. And about ten years ago I started writing books. I knew some folks at How Stuff Works and we started talking about maybe turning one of those books into a podcast. This was not long ago, three-ish years, but it was still before the giant podcast boom. First, we thought we would do something with my book If Nuns Ruled the World. It’s about bad ass feminist nuns who do incredible shit. I still want to do that podcast by the way. I think about it all the time.

We ultimately landed on doing something based on the memoir of my first year of marriage called How to Be Married. It was about traveling the world and interviewing people about how the hell you make a marriage work. The best part of that book, besides the time my husband peed himself in a Mayan sweat lodge, was the stories we got from couples all over the world. I realized that we never talk about those stories…the nitty gritty parts of a marriage. We only focus on weddings and divorces…not how we get through the everyday moments. And that is how “Committed” was born.

First, I want to say that it is the most fun I have had in journalism since the Internet went and ripped journalism’s heart out. And I say that as someone who had one of the first blogs at the New York Daily News and went on to digitize a number of magazines. I hate what the Internet did to good journalism, good journalists and people’s attention span. Yet despite that, there is still a hunger for good reporting and good storytelling and I think the podcast medium is so well-suited to creating an intimate connection with an audience and holding their attention for the long haul.

I also think we’re obsessed with multi-tasking. I don’t necessarily think that is the best for our brains in the long run, but podcasts allow us to consume great stories while we do other things like drive, workout, shower or breastfeed an angry baby.

“Committed” interviews usually run about three hours. We boil them down to around 28 minutes but three hours is what it takes to really get someone to open up about their marriage.

It’s very similar to the advice I give to people who tell me they want to write a book: “That’s great. Good for you. Try it first.” And I don’t say that to be an asshole. I say it because writing is not some kind of magical talent. It is a skill and a muscle that takes hard work and once you start doing that work you might not want to do it anymore. I have challenged a ton of aspiring writers to write 1,000 words a day for 30 days straight. You can’t skip a day. And if you can do that you can be a working writer and probably manage to write a book. Some of those aspiring writers have gone on to write incredible novels. And some people kept their day jobs.

So it’s the same with podcast hosting. If you want to do it then do it. Try it. Write up an episode and then cut it down into a compelling script. Then do it again. And again. Podcasting didn’t come naturally to me. I had to train myself to do it. Just learning to script a show and adjust my interviewing style for audio took about six months before we were ready to launch “Committed.”

It’s so cliché but my kids really inspire me to be more curious every day. It’s easy to get burned out as a reporter, especially these days. And then suddenly you have a three-year-old and everything is so interesting to him. And he has a million questions about why leaves turn brown or what a polar bear’s skin looks like under its fur or what pee is made of and suddenly the world is fascinating again. I try to harness their curiosity in every single interview I do and new project I take on.

How has learning more about commitment strengthened your own marriage?

I get asked this all the time and the answer is always a mix of a grunt, a shrug and a snort. That’s sort of a joke, but not entirely. Marriage is hard and anyone who tells you that it isn’t is probably lying to you and sleeping with someone other than their spouse. The one thing that “Committed” has truly done for me is give me new language for talking to my husband Nick about things. I can bring up something that came up on the show and it will open the door to a conversation about our own relationship we never would have had. That’s harder to do if you don’t host a show about marriage.

It has also increased my gratitude muscle. Our episodes often contain interviews with couples who have gone through some of the most difficult things a couple can go through: strokes, brain tumors, drug overdoses, a terrorist attack, attempted suicide and they have come out the other end of those crises together. If they can weather those things I can deal with the fact that my husband doesn’t want us to put a television in our living room and refused to hire movers last time we moved.

Whether you’re looking for hosting advice or tips to stay motivated, check back next week for more featured hosts and make “Creator Mondays” a new Monday ritual. And don’t forget to check out Jo’s hilarious and inspiring podcast, “Committed,” streaming now on iHeartRadio!